The following is an exhaustive list of popular palaces in Rajasthan, followed by a brief information on each of them, wherever available. Most of these Palaces have been converted into Museums or Heritage Hotels and are open to public for viewing.

Amber Palace (Amber Fort). Also known as Amer Fort, located in Amer, Rajasthan, India. Amer is a town with an area of 4 square kilometres (1.5 sq mi) located 11 kilometres (6.8 mi) from Jaipur, the capital of Rajasthan. Located high on a hill, it is the principal tourist attraction in Jaipur. The town of Amer was originally built by Meenas, and later it was ruled by Raja Man Singh I (December 21, 1550 – July 6, 1614). Amer Fort is known for its artistic Hindu style elements. With its large ramparts and series of gates and cobbled paths, the fort overlooks Maota Lake, which is the main source of water for the Amer Palace.

Samode Palace, Jaipur. Former residence of the thakurs of Samode, today a hotel. 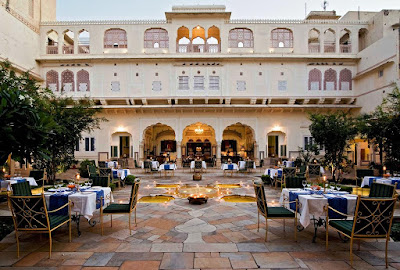 City Palace, Jaipur. Seat of the Maharaja of Jaipur. Now a museum 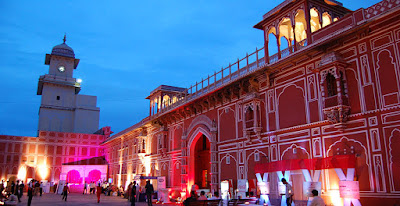 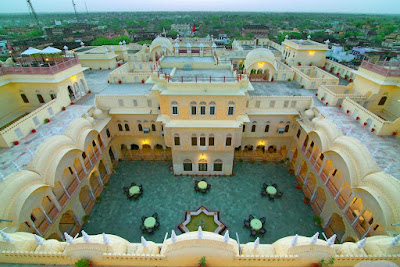 Mahar haveli residence of Rawat of mahar thikhana, now converted into a botique hotel and an upscale restaurant.

Sisodia Rani Palace is a palace garden 6 kilometres (3.7 mi) from Jaipur city in of Rajasthan state in India. It was built by Maharaja Sawai Jai Singh II in 1728. The place consists of tiered multi-level gardens with fountains, watercourses and painted pavilions. A double-storeyed palace occupies the top terrace of the garden. The palace has many galleries, pavilions and beautiful murals depicting scenes from the life of lord Krishna. The palace lies on Jaipur Agra highway.

The palace garden derives its name Sisodia Rani Garden and Palace, from the rani (queen) for whom it was built. She hailed from the Sisodia line of Suryavanshi (Sun dynasty) Rajputs, who ruled and now nominally rule the region of Mewar in Rajasthan.

City Palace, Udaipur. Seat of the Maharana of Udaipur. The City Palace towers over Lake Pichola. The balconies, cupolas, and towers of the palace give a wonderful view of the lake and the surrounding city. This complex actually consists of four major and several minor palaces that collectively form the magnificent City Palace. The main part of the palace is now preserved as a museum displaying artifacts.

Jag Niwas (Lake Palace), Udaipur. Now a hotel but was originally called Jagniwas and served as a summer palace. Built between 1743 and 1746 on the island near Jagmandir in Lake Pichola, the palace, which faces east, is a wondrous sight to behold. The walls made of black and white marbles are adorned with semi-precious stones and ornamented niches. Gardens, fountains, pillared terraces, and columns line its courtyards.

Monsoon Palace, also known as the Sajjan Garh Palace, is a hilltop palatial residence in the city of Udaipur, Rajasthan in India, overlooking the Fateh Sagar Lake. It is named Sajjangarh after Maharana Sajjan Singh (1874–1884) of the Mewar Dynasty, who it was built for in 1884. The palace offers a panoramic view of the city's lakes, palaces and surrounding countryside. It was built chiefly to watch the monsoon clouds; hence, appropriately, it is popularly known as Monsoon Palace. It is said that the Maharana built it at the top of the hill to get a view of his ancestral home, Chittaurgarh. Previously owned by the Mewar royal family, it is now under the control of the Forest Department of the Government of Rajasthan and has recently been opened to the public. The palace provides a beautiful view of the sunset

Junagarh Fort and Palace, Bikaner. Seat of the Maharaja of Bikaner. Now a museum.

Gajner Palace, outskirts of Bikaner. Former hunting lodge of the Maharaja of Bikaner.

Lalgarh Palace, Bikaner. Former royal residence. A part have been converted into a hotel, while the remainder is a museum.

Umaid Bhawan Palace, Jodhpur. Seat of the Maharaja of Jodhpur. Part of the palace has been converted into a hotel.

Jaisalmer Fort, Jaisalmer. Seat of the Maharaja of Jaisalmer.

Lalgarh Palace, Bikaner. Former royal residence. A part have been converted into a hotel, while the remainder is a museum.

Mundota Fort and Palace, A 450-year-old palace located 18 miles north-west of Jaipur. Former royal residence of the Thakurs of Mundota which has recently been converted into a heritage hotel.