Basic data and tourism information on Jalore District of Rajasthan


Jalore Fort is the main attraction of Jalore. It is a town in the Indian state of Rajasthan which is one of the nine castles of the Maru, under the Paramaras in the 10th century. It is one of the most famous and impressive forts in the state and has been known through history as the Sonagir or the ‘golden mount’.
The precise year of its construction is not known; however it is believed to be built between the 8th and 10th centuries. Jalore fort is perched atop a steep hill. It commands a view of the town from rocky outcrop 336m high, fortified with a wall and bastions with cannons mounted upon them.

The fort has four gigantic gates however it is approachable only from one side, after a two-mile long serpentine ascent. The approach to the fort is from the north, up a steep, slippery road through three rows of fortification to a single rampart wall 6.1m high. It takes an hour to climb up. The fort is built on the lines of traditional Hindu architecture.

Sundha Mata temple is about 900 years old temple of Mother goddess situated on a hilltop called 'Sundha'. At 1220 m height in the Aravalli ranges atop the Sundha Mountain is a temple of goddesses Chamunda Devi, a very sacred place for devotees.

There is a wildlife sanctuary nearby covering an area of 107 Sq. Km. near to KHODESHWAR MAHADEV in JAWIYA forest area which is also a wonderful wild life & natural spot. In the sanctuary. Sloth Bear, Blue-Bull, Jungle Cat, Desert Fox, Striped Hyena, Hanuman Langur, Vulture, owl, Indian porcupine, rock & jungle Bush Quail & Spotted dove and 120 species of birds can be spotted.

Shri Laxmi Vallabh Parshwanath 72 Jinalaya spread across 80 acres of land. The pilgrimage is built almost 6 kms away from Bhinmal town in Jalore district.


Bhinmal was earlier known as Shrimal Nagar (or Bhillamal), which was an early capital of the Kingdom of Gurjars. There are evidences found which indicate that Lord Mahavir Swami, the 24th Tirthankar had lived in these places. That’s the reason Bhinmal is a very holy place for Jainism.
The complex offers pilgrimage as well as temporary charitable rest houses to travellers. It is built completely in marble and presents a magnificent view. 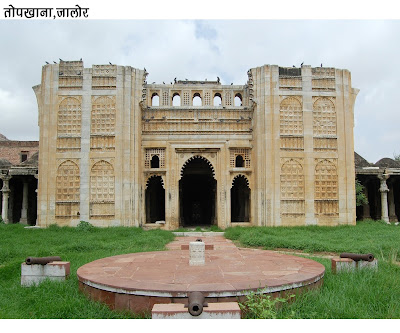 In the middle of Jalore Town, remnants of a Sanskrit school and a shrine of King Bhoj who was a scholar of Sanskrit are found. King Bhoj was known for building a number of schools in Dhar, Ajmer and Jalore. During the pre-independence period, artilleries were kept in these school buildings and it was known as "Topekhana".


After independence, the supply officers transformed it into storage for food grains. This building is now under the state’s archaeological department and is guarded by security personnel. This school is adorned with stone carvings, which is a major attraction of this site. It is flanked on both sides with small temples, which are no longer in use and have no idols present. The most interesting feature of Topkhana is a room, built 10 ft above the ground with stairs leading to it. It might be considered as the seat of the headmaster or teacher. This school building is supported by 276 pillars. There is a temple on the left side of the main gate of the school that might have housed an idol or a Shiva Linga, in the past.
Posted by Manoj Bhargava at 10:43 AM