Basic data and tourism information on Jodhpur District of Rajasthan

Jodhpur is the second largest city in the Indian state of Rajasthan and officially the second metropolitan city of the state. It was formerly the seat of a princely state of the same name. Jodhpur has historically been the capital of the kingdom known as Marwar, which is now part of Rajasthan. Jodhpur is a popular tourist destination, featuring many palaces, forts and temples, set in the stark landscape of the Thar Desert.
The old city circles the fort and is bounded by a wall with several gates. However, the city has expanded greatly outside the wall over the past several decades.
Jodhpur lies near the geographic centre of the Rajasthan state, which makes it a convenient base for travel in a region much frequented by tourists. 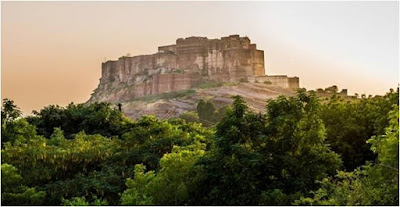 Guarding the city below, crowning a perpendicular cliff, the fort was founded by Rao Jodha in 1459 Ad when he shifted his capital from Mandore. Standing sentinel to the city below, it overlooks the rugged and rocky terrain and houses a palace intricately adorned with long carved panels and latticed windows exquisitely wrought from red sandstone. The apartments within, have their own magic the Moti Mahal (Pearl Palace), Phool Mahal (Flower Palace), Sheesh Mahal (Mirror Palace), Sileh Khana and Daulat Khana with a rich varied collection of palanquins, howdas, royal cradles, miniature paintings of various schools, costumes, furniture and an impressive armoury. The display of cannons on the ramparts near Chamunda temple is among the rarest in India. As you climb up, folk musicians revive the grandeur of a bygone era. 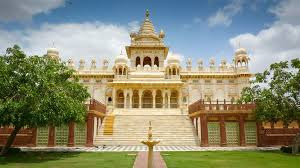 Built in the memory of Maharaja Jaswant Singh II, in 1899, the imposing white marble memorial marks the site of a royal crematorium. The cenotaph houses portraits of successive rulers. These four cenotaphs commemorate notable acts of bravery, generosity of the four successive rulers.
UMAID BHAWAN PALACE 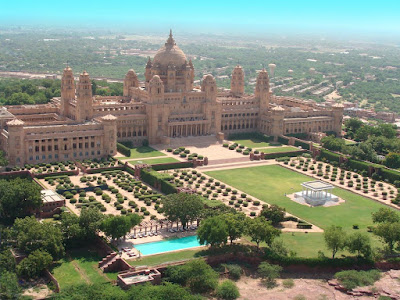 Built by Maharaja Umaid Singh (1929-1942), and named after him, this exquisite palace is also known as Chittar Palace because of the local Chittar sandstone used. It is a splendid example of Indo-colonial and art deco style of the 30s. A unique feature of this palace is the fact that the hand chiseled sandstone blocks have been put together in a special system of interlocking, there is no mortar binding. A portion of the palace has been converted into a hotel, the other remains on view to visitors in the form of an excellent museum which houses model airplanes, weapons, antique clocks and bob watches, Priceless crockery, and hunting trophies. Both sections retain the ambience of royal splendor. 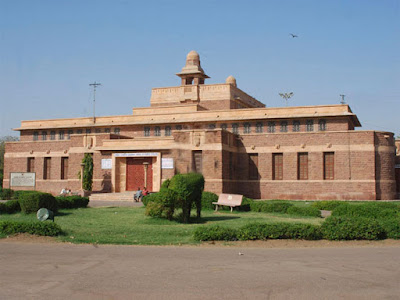 Govt. Museum, Jodhpur also known as Sardar Government Museum is located in Public Park (Ummed Bagh), this museum was built in 1909. It was opened for public on 17 March, 1936. The museum is named after Maharaja Sardar Singh of Jodhpur. The museum also has a very beautiful garden.


A variety of exhibits are displayed inside the museum which include: weaponry,  items of terracotta, miniature paintings, inscriptions, metallic objects, arms, textiles, local arts and crafts, large number of statues of stones and also a very large number of coins. In addition to these, about 4000 miscellaneous objects are displayed in various sections of the museum like historical section, armory, art & craft section and also in Archaeological Section. The museum also exhibits paintings of the rulers, and scriptures and images of Jain Tirthankars. 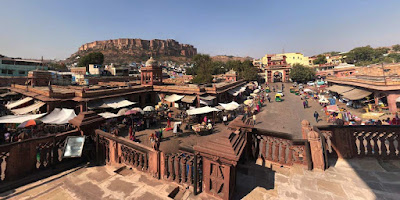 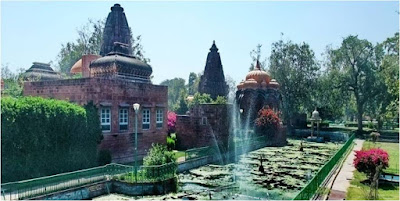 Mandore Garden is one of the best tourist spots in Jodhpur. The garden, with royal cenotaphs, attracts tourists to experience the architectural style and attractions of the garden. Spending time in this garden will be relaxing and pleasant. So never miss this place on your sightseeing list in Jodhpur.
History of Mandore gardens starts from the 6th century. At that time, Mandore was under the rule of Pratiharas of Mandavyapura. The king of Rathore dynasty Rao Chunda married the Princess of Pratiharas. As a dowry, he got the Mandore Jungarh Fort.
After a while, in 1427, Mandore came under the rule of Rao Rinmal Rathore who was also the administrator of the kingdom of Mewar until 1438. The Mewar ruler Rana Khumba overtook the throne of Mandore by assassinating Rao Rinmal. During the assassination of Rao Rinmal his son escaped and tried a lot to recapture the Mandore but failed. In 1453, Mandore went under the rule of Rao Jodha.
After many invasions, Mandore became the capital of Jodhpur kings. Even though many dynasties invaded Mandore, like Muslim rulers of Gujarat and Malwa. To protect Mandore, the capital of Jodhpur was changed to Mehrangarh Fort which was considered safe for the kingdom wealth.
Posted by Manoj Bhargava at 1:26 AM