Basic data and tourism information on Karauli District of Rajasthan

Karauli District is a district of Rajasthan state in western India. Karauli town is the district headquarters. The District comes under Bharatpur Divisional commissionerate. Karauli is famous for popular red-stone.
The population of the district is 1,458,248 (2011 census), indicating a population density is 264 persons per km2.
The district of Karauli encompasses an area of 5043 km2. It is bordered by Dholpur District to the east; Bharatpur District to the north-east; Dausa District to the north; and Sawai Madhopur District to the west.
The Chambal River forms the south-eastern boundary of the district, 5 km from Mandrayal across which lies the state of Madhya Pradesh. While almost the entire district is covered by hills and ravines, there are no lofty peaks, the highest having an elevation of less than 1400 feet above sea level.
Good grade stone and some iron ore comprise the mineral resources of the area.
Karauli is one of the holiest cities of India with more than 300 temples. 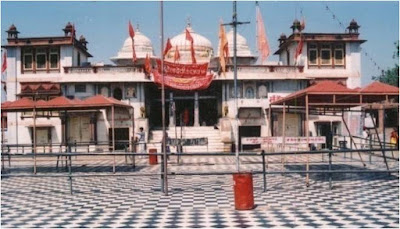 Kaila Devi Temple is a Hindu temple situated 23 km from Karauli and 37 km from Gangapur City in the Rajasthan state in India. The temple is located on the banks of the Kalisil River, a tributary of the Banas River in the hills of Trikut, 2 km to the north-west of Kaila village. The temple is dedicated to the tutelary deity, goddess Kaila Devi, of the erstwhile princely Jadaun Rajput rulers of the Karauli state. It is a marble structure with a large courtyard of a checkered floor. In one place are a number of red flags planted by devotees. 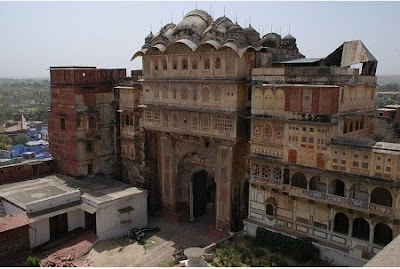 Madan Mohan is a form of the Hindu god, Krishna. Krishna is celebrated as Madan Mohan, who mesmerizes everyone. His consort Radha is glorified as Madan Mohan's Mohini, the mesmerizer of the mesmerizer for spiritual aspirants. Radha is known as the mediator without whom access to Krishna is not possible. Originally from Shri Vrindavan, Madan Mohan ji went to Amer in Jaipur with Raja Sawai Jai Singh II - the founder of Jaipur and from there was brought to Karauli in Rajasthan by Maharaj Gopal Singh after he conquered the battle of Daulatabad. 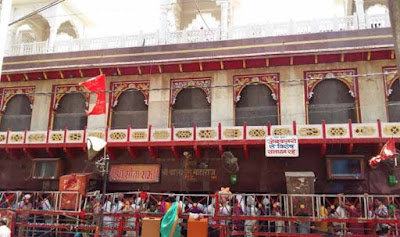 Mehandipur Balaji Mandir is a mandir in the Indian state of Rajasthan dedicated to the Hindu God Hanuman. The name Balaji is applied to Sri Hanuman in several parts of India because the childhood (Bala in Hindi or Sanskrit) form of the Lord is especially celebrated there. It is important to note that the temple is not dedicated to Balaji - another name for Krishna. Unlike similar religious sites it is located in a town rather than the countryside. Its reputation for ritualistic healing and exorcism of evil spirits attracts many pilgrims from Rajasthan and elsewhere. 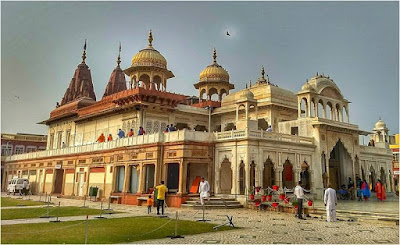 Shri Mahaveer Ji Temple is in Hindaun City, Karauli district in Rajasthan, India. Earlier known as Chandanpur, this small village became famous as a Jain religious site after an ancient idol of Mahaveer was excavated from its soil several hundred years ago. It was then renamed as Shri Mahaveer Ji. This idol was excavated over 200 years ago from the same spot, where the temple was constructed. Thousands of worshipers flock from across India to catch a glimpse of this famous statue. 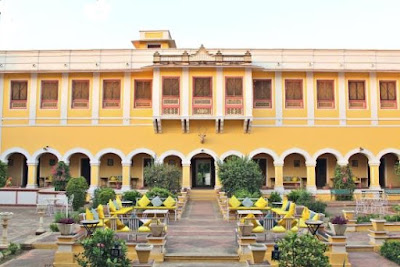 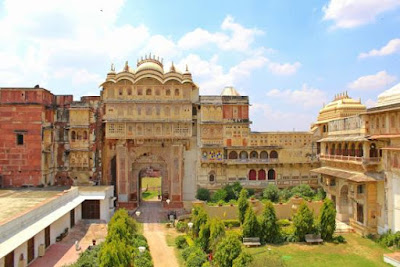 Maharaja Ganesh Pal Deo Bahadur, the great monarch of Karauli, got the ancient fortress built in the year 1938. It was preordained to function as the palatial house of the old regal family. Classical buildings with royal panache and antique historical fittings in the spacious interiors are some of the main basic qualities of the Bhanwar Vilas Palace. Recently partially transformed into a rich heritage hotel, it still privately accommodates the wealthy imperial clan of Karauli.

The Kaila Devi Wildlife Sanctuary begins right near the temple and runs along both sides of the road all the way to Karanpur, and further on to join the Ranthambhore National Park. Chinkaras, nilgai, jackals and leopards are to be found here, as are birds such as sandpipers and kingfishers. 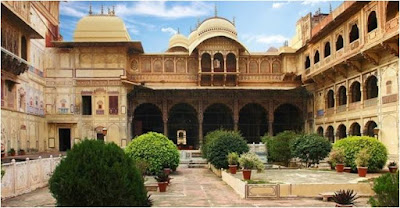 Arjun Pal built the palace, along with the town, in the 14th century. However, little or nothing of the original can now be seen. What you do see is the structure erected by Raja Gopal Singh in the 18th century. He chose to adopt the Delhi style of architecture – the abundance of red sandstone in Karauli, similar to that used in Delhi, made the rendering easy. The more embellished additions came in the 19th century. White and off-white stones have been used very appropriately, painted upon with bright blues, reds, browns and oranges. From the terrace atop the palace, you can see the town laid out by the River Bhadrawati below, and the ravines and hills beyond.

The chhatri of Raja Gopal Singh, outside the Nadi Gate leading out of the palace to the river below, is stunningly adorned with frescoes. Dayanand Saraswati, the 19th century reformer and founder of the Arya Samaj, is said to have given a sermon here. 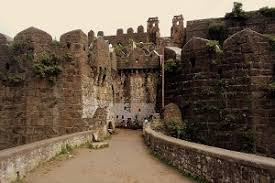 Located 70 km from the district headquarters near Karanpur Untgiri, Durg devgiri is historical.

Gufa temple is believed to be the original temple of Kaila Devi. The native and foreign tourists are requested not to venture into this region as this forest area is dotted with wild animals. This temple falls under the jungle of the Ranthambore. The devotees walk nearly 8–10 km from the town in order to reach this temple and have darshan. 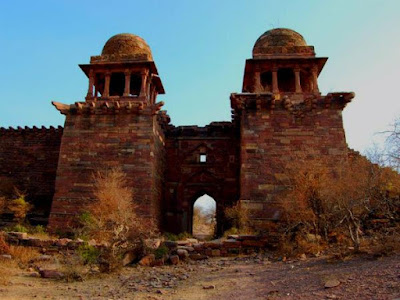 Timangarh Fort is located in the proximity of Karauli, in the Masalpur sub-tehsil. According to historians, the fort was built in 1100 AD but was destroyed soon after by an attack. In 1244 AD, Raja Timanpal, the scion of Vijay Pal, a Yaduwanshi ruler, reconstructed the fort. A museum of architecture with architectural sculptures is a precious treasure of the fort.
It is believed that there are ancient ashtadhatu as well as stone idols and sculptures hidden under the temples of the fort complex. Visitors can also see the religious, geometrical and flower patterned carvings on the rooftops and pillars of the temples. These pillars are also adorned with carvings of several gods and goddesses.
Ancient records discovered at the site corroborate the belief that the fort was occupied by Mohammad Gouri's forces from 1196 to 1244 AD. There is a Sagar Lake at the side of the fort, which is believed to have a Paras stone at its bottom. 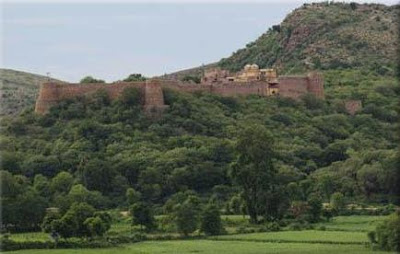 Ramathra Fort is situated in Sapotra in the Karauli District of Rajasthan. The fort is located between Keoladeo Ghana Bird Sanctuary in Bharatpur and Ranthambore Tiger Reserve in Sawai Madhopur. At a distance of 15 km from the fort is located Kailadevi Wildlife Sanctuary. Within its premises, the attractions are the fort, the lake and countryside.
Maharaja of Karauli granted the fort as jagir (fiefdom) in 1645 AD to Thakur Bhoj Pal, his son. The fort is currently managed by Thakur Brijendra Raj Pal and his family. Within the fort lie Ganesh Mandir and Shiva Mandir that houses a marble idol of Lord Shiva displaying the craftsmanship of the early 18th century.
From the fort, tourists can enjoy the views of the farmland, rugged scrub of the Daang Plateau, Kalisil Lake and its irrigation canal. The lake is visited by numerous water birds from the nearby Bharatpur Bird Sanctuary. Owing to its location in part of a green farming belt in the Kalisil River Valley, the area around the fort abounds with greenery. 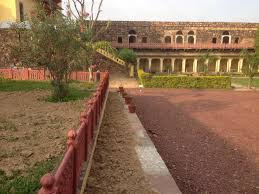 Amargarh Fort is located on a hill top in the village of Amargarh in Rajasthan. This 250-year-old fort was built under the supervision of Raja Amar Mal, after whom it was named. The fort is surrounded with greenery and a field of local crops. Moreover, tourists visiting the fort can also view the forests and mountains all around it.
Posted by Manoj Bhargava at 12:40 AM