Basic data and tourism information on Nagaur District of Rajasthan 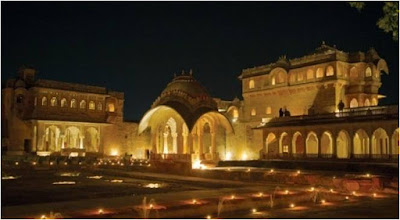 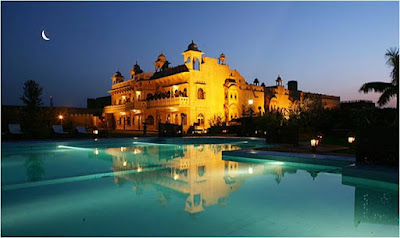 KHINVSAR FORT is situated 42 Km away from Nagaur on the National Highway No. 65 towards Jodhpur; 500 years old fort in the middle of the Thar Desert; turned into a hotel furnished with modern facilities. Mughal Emperor Aurangzeb used to stay here; Khinvsar town has 25 small temples; black deer roaming in herds are a very popular tourist attraction.

KUCHAMAN FORT is one of the oldest & most inaccessible forts of Rajasthan; situated on top of a straight hill; unique water harvesting system; Jodhpur rulers used to mint their gold & silver currency here. The fort, converted into a hotel, affords a  beautiful view of the city and has a strong attraction for  tourists.


Makrana
A treasure trove of marble; exemplifies how stones can be shaped & made use of. Marble mining is the  main-stay of living for the locals,  and it is worth seeing how stone brings quality in life. This marble used in the construction of the Taj Mahal, Victoria Memorial & other buildings in white stone.
Merta 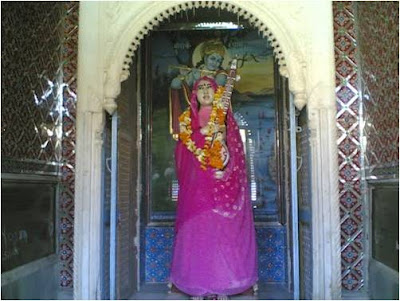 BHANWAL MATA TEMPLE: 25 km away from Merta City, carries a very interesting story that when thieves were found to be under threat of life they remembered mother by heart, mother appeared for their rescue, temple was got constructed under obligation, the thieves who escaped vowed never to commit theft again, mother takes two a half cups of wine from a true seeker.

Posted by Manoj Bhargava at 9:41 AM No comments:

Basic data and tourism information on Pali District of Rajasthan 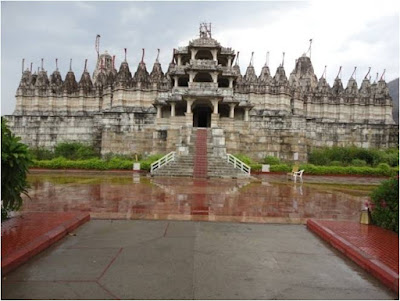 Ranakpur is a village located in Desuri tehsil near Sadri town in the Pali district of Rajasthan in western India. It is located between Jodhpur and Udaipur. It is 162 Km from Jodhpur and 91 km from Udaipur, in a valley on the western side of the Aravalli Range. The nearest Railway Station to reach Ranakpur is Falna. Ranakpur is one among the most famous places to visit in Pali, Rajasthan.
The construction of the famous Jain Temple is well documented in a 1437 CE copper-plate record, inscriptions in the temple and a Sanskrit text Soma-Saubhagya Kavya inspired by a dream of a celestial vehicle, Dhanna Shah, a Porwal, commenced its construction, under the patronage of Rana Kumbha, then ruler of Mewar. The architect who oversaw the project was named Deepaka. There is an inscription on a pillar near the main shrine stating that in 1439 Deepaka, an architect constructed the temple at the direction of Dharanka, a devoted Jain. When the ground floor was completed, Acharya Soma Sundar Suri of Tapa Gachha supervised the ceremonies, which are described in Soma-Saubhagya Kavya. The construction continued until 1458AD.


Ranakpur is widely known for its marble Jain temple, said to be the most spectacular of the Jain temples. There is also a small Sun temple which is managed by the Udaipur royal family trust.


Ranakpur is widely known for its marble Jain temple, said to be the most spectacular of the Jain temples. There is also a small Sun temple which is managed by the Udaipur royal family trust. 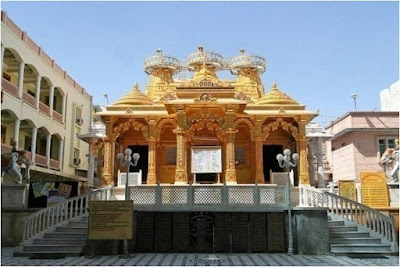 Falna is a town in Pali District in the state of Rajasthan. It is an important railway station on Ahmedabad-Delhi railway line. Falna is 75 km from the district headquarters of Pali.
Falna is the nearest railhead to famous Ranakpur temples. The temples are 35 km from Falna. In Falna itself the Jain Golden Temple is a visitor attraction.
Falna Jain golden temple is a temple built at Falna near the famous Jain temple Ranakpur. It is a major attraction for Pilgrims. The temple belongs to Shri Shankeshwar Parshwanath Bhagwan. “Kanch ka Mandir” (Mirror temple) located below the main temple is also a place of worship, where the walls are covered with small sizes of mirrors. Though it is small, but it is worth visiting.
Apart from the place mentioned above, the other worth visiting places in the district are, the temple dedicated to Ramdeoji near village Biratiya in Raipur tehsil, the fort of Desuri, Kurki the birth place of the well-known poetess Mirabai on the border of Jaitaran tehsil, Jain temples of Narlai in Desuri tehsil, picnic spot in the Deepawas in Raipur tehsil, and Jain temples in Sadri town. 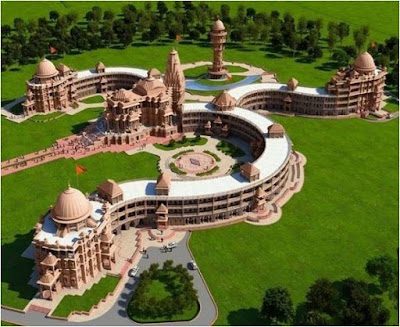 The Society has its head office in village Jadan district Pali, Rajasthan. Since 1993 the Society has been active in the areas of Health, Education, promotion of Yoga and Vedic culture, Rainwater Harvesting, and development of peace and understanding across cultures and religions.
The central building of this large complex, is constructed in the shape of the ancient Sanskrit symbol OM. The sound of OM consists of three letters: A, U and M. It represents the cosmic vibration, the original eternal sound. OM is the underlying source of creation, adi-anadi – the reality that was, is, and will forever be. Therefore OM represents wholeness, completion. It is the most beautiful mantra, which contains all three fundamental aspects of God – Brahma (the Creator), Vishnu (the Sustainer) and Shiva (the Liberator).
Situated in an area of 250 acres, this central monument will be the largest man-made symbol of OM in the world. The 108 compartments of residential units that are to form this impressive OM shape, attract tremendous cosmic energy. These units are symbolic of the 108 beads of the Japa Mala. A lake will represent the crescent Moon of the OM symbol. Its point, known as bindu, will be constructed as a tower, 108 feet in height, with 12 temples. At 90 feet, there will be a large overhead water tank and above this, a Surya temple dedicated to the Lord of the Sun. 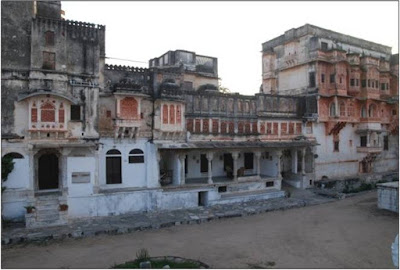 Ghanerao is a village in Desuri tehsil and is situated in the south-west of Desuri on the road leading to Sadri. The place was held by a first class Jagirdar of the erstwhile Jodhpur state prior to the independence and it was the prime duty of this Jagirdar to defend the famous fort of Kumbhalgarh (now in Rajsamand district). There are many, both Hindu and Jain, temples in the village and its vicinity. There are about eleven Jain temples; some of them are quite old, in the village itself besides Hindu temples of Laxmi Narainji, Murlidharji and Charbhujaji. On the outskirt of the village is situated a Math known as Giriji ki Dhooni. A temple of Gajanand here is worth seeing. A mosque is also located here, which is worth seeing.
Another Jain temple, known as Muchhala Mahavir is also situated in the vicinity of the village. The temple is said to be very old and whose management is with the Anandji Kalyanji Trust.

Posted by Manoj Bhargava at 9:27 AM No comments: