Basic data and tourism information on Sikar District of Rajasthan

The district is located in the north-eastern part of the state of Rajasthan. It is bounded on the north by Jhunjhunu district, in the north-west by Churu district, in the south-west by Nagaur district and in the south-east by Jaipur district. It also touches Mahendragarh district of Haryana on its north-east corner.
The district has an area of 7742.44 km² and a population of 26,77,737 (2011 census). Sikar, Churu and Jhunjhunu districts comprise the Shekhawati region of Rajasthan. The old name of Sikar was "Veer Bhan Ka Bas". 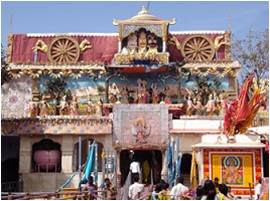 Khatushyamji is located 65 Km. away from Sikar & 80 Km. from Jaipur via Ringus. This little village is famous for Shyamji Temple built with white marbles. Ponds for holy dip and Shyam garden is worth visiting.
The legend of this immensely popular Krishna temple can be traced back to the medieval Mahabharat, where Barbareek, the son of great Pandav brother Bhim and Nag Kanya (snake princess) displayed his great warrior skills that pleased Lord Shiva who endowed his blessings in the form of Teen Ban (three arrows) and Agni Dev (fire god) gave him a bow, so that he could conquer all the three worlds. In order to watch the famous war of Mahabharat, he sat towards the battle field and in between his tryst with a Lord Krishna in disguise become a vital part of the history and thus the incarnation of Khatu Shyamji. The lord Krishna asked the young Barbareek to sacrifice his head for charity, because otherwise the victory of Pandavas would not be possible since he possessed the Teen Bans. The boy maintained his promise of Sheesh Daan (sacrifice of one’s head) as a true Kshatriya but at the same time wished to watch the war and his wish was granted. Later on, his head was buried in Khatu where the king had a dream and was inspired to construct a temple and place the head in a religious manner. Till this date his devotees are blessed by just pronouncing his name from the bottom of their heart with true Samarpan.
The Khatu Shyamji Fair held in the months of February and March and various forms of dance, art and music are displayed.
An annual fair also held between the Phalgun Sudi Dashmi and Dwadashi, lasting for three days. 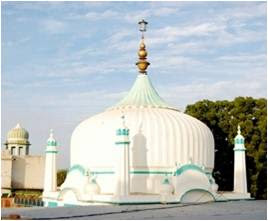 Hazrat Khwajah Haji Muhammad Najmuddin Sulaimani Chishti, mostly known as Huzoor Najam Sirkar is a well-known name among the Aulia-e-Ekram of the Sacred Land of Rajasthan (The Land of Hazrat Khwajah Gareeb Nawaz R.A. & Hazrat Sufi Hameeduddin Nagauri R.A.), belongs to the great Silsilah-e-Chishtiah. His Holy Shrine is located at Fatehpur Shekhawati in district Sikar which is 165 km away from Jaipur and 55 km from Sikar on N.H.12.


In the 13th century Hijri he had played a prominent role in spreading the Silsilah in all parts of the country. 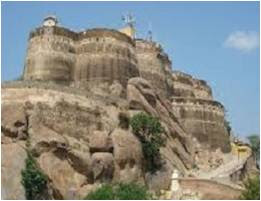 Laxmangarh town is a popular tourist place that is known for the Laxmangarh Fort. The fort was built on a hill in 1862 by Laxman Singh, Rao Raja of Sikar. It is believed that the foundation of the Laxmangarh town was based on the planning system of the capital city Jaipur. The structures in the town are adorned with fresco paintings in the Shekhawati style.
There are numerous havelis in the town, namely the Sawant Ram Chokhani Haveli, Bansidhar Rathi Haveli, Sanganeria Haveli, Mirijamal Kyala Haveli, Char Chowk Haveli and Kedia Haveli. The Radhi Murlimanohar temple, constructed in 1845, is popular for the beautiful sculptures of deities on the wall. 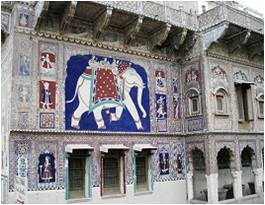 Ganeshwar
Ganeshwar is a village in Neem Ka Thana Tehsil in the Sikar District. Ganeshwar is a pilgrimage as well as a salubrious Picnic spot. The hot sulphur springs here is a major draw. A dip in the spring, it is believed, cures skin diseases. It is an ancient site. Excavations in the Ganeshwar areas have revealed the remains of a 4000 years old civilizations.
Historian Ratan Lal Mishra wrote that Ganeshwar was excavated in 1977. Red pottery was found here with black portraiture. The period was estimated to be 2500–2000 BC. Nearly one thousand pieces of copper were found there. Ganeshwar is located near the copper mines of the Sikar-Jhunjhunu area of the Khetri copper belt in Rajasthan. Excavations revealed copper objects including arrowheads, spearheads, fish hooks, bangles and chisels. With its microliths and other stone tools, Ganeshwar culture can be ascribed to the pre- Harappan period. Ganeshwar mainly supplied copper objects to Harappa.
Posted by Manoj Bhargava at 7:40 AM